On Sunday afternoon, October 28th, we assembled at Lytheria, our friend Lee Schneider’s east-side house, for the annual trick-or-treat “production.” The theme this year was “King Arthur’s Court.” Lee had asked me to play Arthur, and Georgie chose to be the Lady of the Lake. The shtick was that this was a feast day, and Arthur, as he frequently did in the Arthurian Canon, would not go to dinner until he had seen some wonder. Sir Tristan, acting as doorkeeper, ushered groups of trick-or-treaters before the King and Queen, who would query them as to what sort of wonders they represented. If we were satisfied they were adequately wondrous, we passed them on to the Treasurer and the Soothsayer, who gave them a candy bar and a more-or-less dire prophecy. Going out the back way, they got to meet the Pict and his pet dragon.

Of course, we found everyone wondrous, although we made the no-costume kids work for it a bit more. This actually got us some charming answers: “What’s marvelous about you?” “I’m a marvelous dancer.” “I’ve got a wonderful personality.”

Although it wasn’t actually raining during the afternoon, the generally dank and chilly day reduced turnout to a mere six hundred and thirty (some). “Black Panther” was the most popular costume, being the favorite choice of black boys. We also had a couple of Killmongers, and one Shuri from that movie. Hogwarts students (all Gryffindor) were also very popular. Batman, various ninjas, and other superheroes showed up among the younger kids, while older ones tended to be more quirky, with several banana costumes, and a couple of tacos. 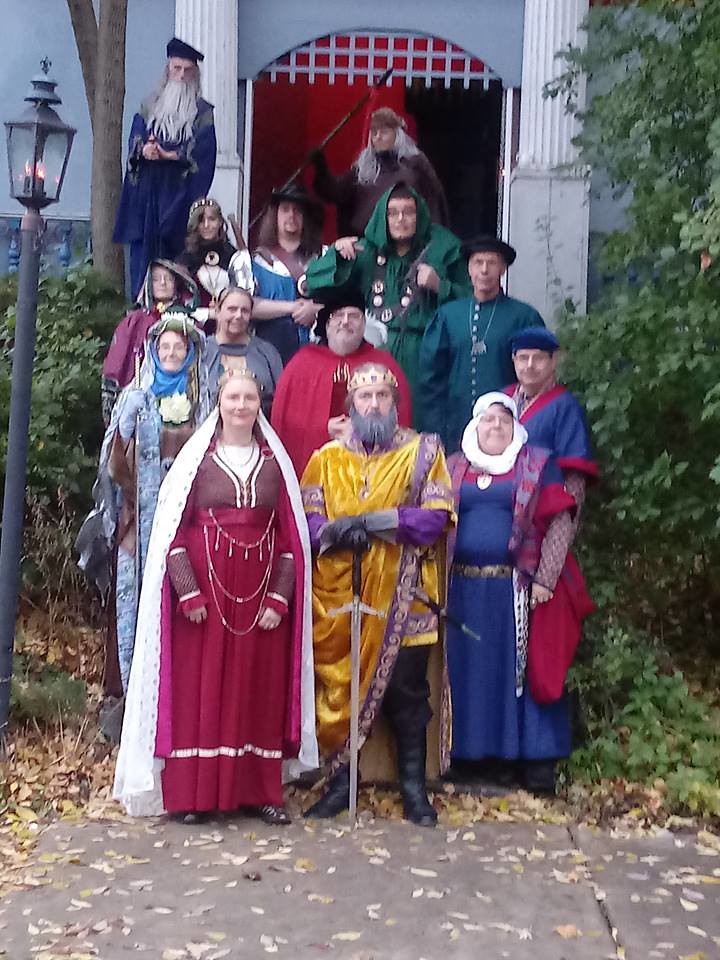 This entry was originally posted at https://sinister-sigils.dreamwidth.org/331521.html. Please comment there using OpenID.

On the evening of October 31, we went to see the re-broadcast of the Metropolitan Opera’s production of La Fanciulla del West, by Giacomo Puccini.

This was the same production (costumes, sets) we had seen before, but with a new cast and conductor.

Based upon a play, The Girl of the Golden West, by David Belasco, who, in the early 1900’s, was the master of Broadway, the story deals with love and desire in a California gold-rush town.

Eva-Maria Westbrook plays Minnie, saloon owner and the only white woman in the mining camp. Pretty much every male in the town professes to be in love with her, ranging from the avuncular guardianship of her business partner, Nick (Carlo Bosi), to the martial ambitions of Sonora (Michael Todd Simpson), to the physical desire of gambler-turned-sheriff Jack Rance (Željko Lučić). Minnie staunchly defends her independence, never even having kissed a man.

This changes when she meets the handsome and dashing “Dick Johnson” (Jonas Kaufman), who is secretly the wanted bandit Ramirez. The tension between Minnie, Jack, and Dick drives the plot, fired by the ongoing manhunt for Ramirez.

We had seen this same production a few years ago, but thought this cast was better, seeing to bring more fire and life to the melodramatic story. All the principals sang beautifully, as did the supporting singers and the chorus. Maestro Marco Armilato led the orchestra flawlessly through what is one of Puccini’s most modernistic and difficult scores.

This was a very nice evening at the opera, and we enjoyed it very much.

This entry was originally posted at https://sinister-sigils.dreamwidth.org/331986.html. Please comment there using OpenID.
Collapse